I’m not going to end up having attended either Worldcon or World Fantasy this year, but here’s where I’ll be for the rest of 2013 (and the 2014 events I’m already planning to attend).

It’s possible I’ll end up adding to that 2014 list at some point.

[Apparently the Wordpress->LJ crossposter I have installed isn't actually working.]

This year I currently plan to attend:


At this point I'd say the first two on the list are pretty definite, Worldcon is probable, and WFC is still tentative (in part because I'm not thrilled that the hotel is way out near the 404/407 interchange and, according to Google Maps apparently requires two+ different buses (25+ min) to even get to the nearest TTC subway stop, which is Finch, in order to then get into actual Toronto).

Hope to see several of you at one (or more) of these!

Originally published at The Height of Impudence. You can comment here or there.

This is a test of crossposting to LJ via a new WordPress install.

One thing that’s been true since I’ve been paying attention is that everything The Left does is wrong. By The Left I mean everyone to the left of the basic governing power. Third Parties are bad, sitting out elections are bad, putting pressure on elected reps is bad, protesting is bad, primary campaigns are bad, media criticism might hurt their feefees and is bad, saying mean things about Rush Limbaugh is bad, actually discussing your views honestly is bad, etc. Obviously the failure of The Left to take control and run the country does suggest that it is doing something wrong, but no one ever really offers much constructive advice other than…please STFU.

Everyone’s written about this “don’t touch my junk” story, but this new development is so sadly in line with my thesis about these things that it’s almost a cliche. When I wrote about it over the week-end, I pointed out that this was the latest in a series of steps to a police state — the building of a police bureaucracy, the intimidation and the incoherence of security theatre designed to confuse citizens and indoctrinate them to the idea that they should unquestioningly submit to absurd directives from authorities. It’s how you control a populace.

My plans for WFC are to arrive Thursday afternoon, do stuff and talk to people, and head out on Monday morning.

In other words, it's the usual for a World Fantasy!

Some of you I already have plans with, and I hope to see some of the rest of you in the bar.

Originally published at Wake Up. Please leave any comments there.

Atrios on the current economic situation:

This is a righteous rant pointing out that what we have is a complete fucking fail. It’s a failure of our political institutions, of our financial system, of our economy as structured, of the economics profession, of unelected elite GOP Daddies who are supposed to fix things, of the media, of the whole fucking thing. Extended 9.5%+ unemployment is not ok. It means something is seriously fucking wrong, and the people in charge are unwilling or for whatever reason (including being idiots) unable to fix the problem.

That pretty much sums it up.

For those who didn't see it via Twitter/FB: 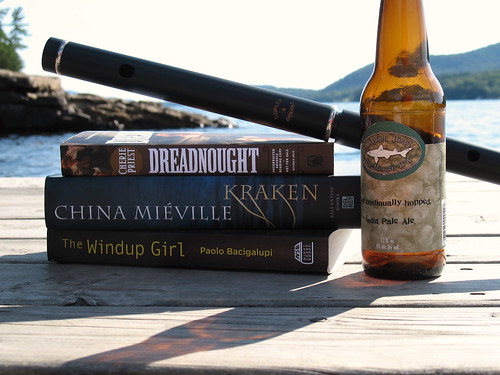 Originally published at Wake Up. Please leave any comments there.

From Glenn Greenwald’s piece titled “What collapsing empire looks like:”

Does anyone doubt that once a society ceases to be able to afford schools, public transit, paved roads, libraries and street lights — or once it chooses not to be able to afford those things in pursuit of imperial priorities and the maintenance of a vast Surveillance and National Security State — that a very serious problem has arisen, that things have gone seriously awry, that imperial collapse, by definition, is an imminent inevitability?

From the always excellent Glenn Greenwald’s piece on The Real U.S. Government:

That’s really the only relevant question: how much longer will Americans sit by passively and watch as a tiny elite become more bloated, more powerful, greedier, more corrupt and more unaccountable — as the little economic security, privacy and freedom most citizens possess vanish further still? How long can this be sustained, where more and more money is poured into Endless War, a military that almost spends more than the rest of the world combined, where close to 50% of all U.S. tax revenue goes to military and intelligence spending, where the rich-poor gap grows seemingly without end, and the very people who virtually destroyed the world economy wallow in greater rewards than ever, all while the public infrastructure (both figuratively and literally) crumbles and the ruling class is openly collaborating on a bipartisan, public-private basis even to cut Social Security benefits?

The answer, unfortunately, is probably this: a lot longer. And one primary reason is that our media-shaped political discourse is so alternatively distracted and distorted that even shining light on all of this matters little.